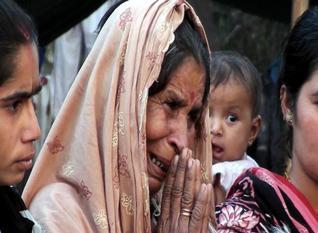 A documentary on the life of the Hindu refugees from Pakistan. A group of 151 Pakistani Hindus entered India on September, 2011 with a one month tourist visa. They came to take refuge from the various religious persecutions they had to face in Pakistan. The group which has a majority of children and women are now sheltered in a camp on the outskirts of New Delhi. But now their visa has expired and is facing deportation. Various organizations are fighting for the basic human rights of these people at the political and judicial level. Their story is a grim reminder of all those lives caught up in no man’s land. As more boundaries are drawn across the human conscience, we fail to realize that humanity has always suffered because of those human boundaries. This documentary traces the difficulties they had to face in Pakistan, their life inside the camp and their hopes for tomorrow.

Rahul Riji Nair graduated from Amrita School of Engineering, with a bachelor’s degree in Information Technology. He is currently employed in NeST Technologies Ltd as a Business Analyst. His passion for film making inspired him to do his first ever documentary called "The Human Boundaries", based on the life of Hindu refugees from Pakistan. He was one among India’s representatives at the South Asian Youth Conference and was the cointernational mobilization. He is a regular columnist for many publications and writes on social issues and international affairs.