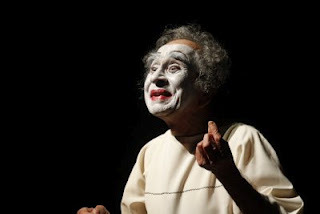 There is something inherently touching about 77 year old, internationally reputed pantomime artiste, Irshad Panjatan performing his piece “Walk of life” before an eager audience in Pune. One look at this frail, stooping “young” man (who enthusiastically gets up from his seat to demonstrate to us a few steps of Kathakali - the dance form that has immensely helped the physical craft of his chosen art) and you know that he earns the right to portray the long journey that human beings make during their lifetime. What also makes his performance special is the fact that he is returning to the stage after a 15 years long sabbatical. Refusing to call it a ‘comeback’, he says he came for the sake of his dear friend Amol Palekar, organiser of the three-day festival “Theatre Beyond Words”, for which he has flown down from his home in Germany. The emotional build-up to the event is, thus, very palpable. It is no wonder then that the septuagenarian, who was “nervous and afraid” hours before the show, receives a standing ovation for his depiction of a man’s life, from the innocence of childhood to the adventurous spirit of youth to the loneliness of old age. When the voluminous shaft of the spotlight first falls on his painted face and his body clothed in a white one-piece, he’s a newborn reacting to the blinding brightness of the outside world, the soundless cry of being cut off from the warm security of the womb escaping his coiled up body. The child has been born, the actor has come to life. The spotlight is the stark space in which he builds his invisible world. Yet, for the next hour or so, you are completely drawn in to the experience of the child’s first encounter with death after he accidentally kills a butterfly, the thrill of freedom when he first rides a bike as a teenager, his tremulous excitement when he meets his lover as a young man and finally, the heartbreaking acceptance of old age when he waves his children goodbye. While the exaggerated gestures or physical movements make for easy and hearty laughs, it’s the minutiae of existence that Panjatan so effortlessly captures that move you, take you through a range of emotions. “ Fortunately or unfortunately, I haven’t been through any formal training in pantomime. I learnt the physical aspects of this art from books and masters whom I met briefly. The difficult part is to imbue soul in to your performance. For that, you have to have the ability to imagine how a child would react, his perplexity, when he sees death in the form of a butterfly which refuses to fly when he blows air on to it,” Panjatan says. It is the same soul with which he glibly slips into the role of a woman who’s dressing up to meet her man. The nuances of expressions which flit across his face - as he becomes the woman who goes about putting hairclips in her bun, making pleats of the saree she’s about to drape, dabbing excess lipstick on a paper and admiring herself in the mirror - are worth the resounding applause that he elicits from the auditorium. But there’s more than just laughter and applauds that Panjatan evokes. He appeals to the universal core of human nature, which smiles when it sees a happy child and saddens when it sees the decline of old age. “Tragedy is the seed of comedy. If you see Chaplin, all his stories are basically sad. The way they are presented causes laughter, but eventually they all make you think,” he explains, unintentionally summing up the effect that his own performance has had on all of us.

Organizer
Sutradar
Sutradhar is promoted by a group of young professionals who have been through and seen many an ordeal. We have known the pain of rejection, hollow promises, exploitation by fellow artistes and the unscrupulous producer and more. But Lawrence Sterner always held us in good stead.