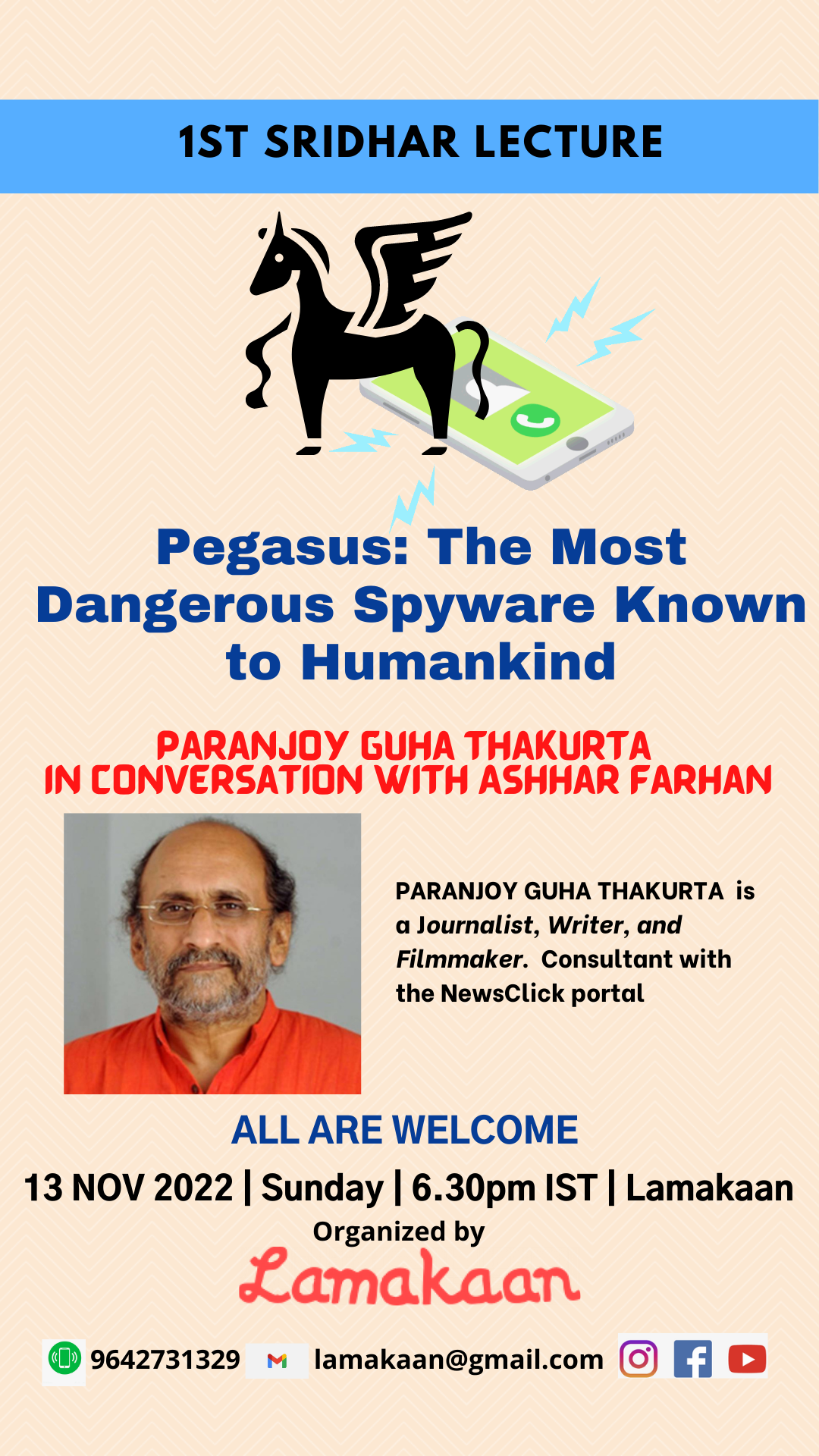 Pegasus: The Most Dangerous Spyware Known to Humankind

This a conversation to celebrate the life of Sridhar Potlachervoo, a brilliant and loving human among us for a mere 42 years.

About the title: Named after a mythical winged horse from Greek mythology, Pegasus is the name of the world’s most potent cyberweapon. Developed by the privately owned Israeli NSO Group, the spyware was intended for use by government law-enforcing agencies. However, the software has been widely misused in several countries worldwide to spy on politicians, including heads of government, journalists, lawyers, government officials, dissidents, and human rights activists. In July 2021, “The Pegasus Project” – comprising Amnesty International, and Forbidden Stories, a Paris-based international non-government organization, working in partnership with over 80 journalists from 17 organizations in ten countries – documented how the spyware was misused to target opponents of ruling regimes mainly. Whereas several governments are investigating how the cyberweapon was wrongfully deployed, the government of India has chosen to confirm neither nor deny whether any of its agencies purchased or used Pegasus. As a person whose mobile phone was allegedly “compromised” by the spyware and was among those who petitioned the Supreme Court of India in this regard, Paranjoy Guha Thakurta is uniquely placed to talk about what is arguably the most dangerous software known to humankind so far.

About Paranjoy Guha Thakurta: PARANJOY GUHA THAKURTA’s professional career started in June 1977 as a print journalist. His work experience, spanning four and a half decades, cuts across different mass media: the written word, the spoken word, and the audio-visual medium—printed publications and websites, radio and podcasts, television and documentary cinema. He is a writer, speaker, anchor, interviewer, teacher, analyst/commentator, publisher, producer, director, and consultant. Much of his work is in English, Bengali (his mother tongue), and Hindi. He has published and been published in other languages as well. His main areas of interest are the working of the political economy and the media in India and the world, on which he has authored/co-authored seven books, published more than 24 books, directed/produced more than 20 long documentary films, and hundreds of short films/videos, including two music videos. In particular, he examines the allocation and pricing of natural resources, the working of crony capitalism and oligarchies, and mass communications in India. He teaches and speaks on these subjects to students and general audiences and trains aspiring—and working—media professionals. As a visiting faculty, he has taught a course on media and society at the Indian Institute of Management Ahmedabad for the last 18 years. He frequently participates in and organizes seminars/conferences. He is a regular contributor to publications and websites. He is featured on television channels and radio programs as an anchor and analyst/commentator. He has been and remains a consultant with the NewsClick portal.

About Ashhar Farhan: Ashhar Farhan, the founder of Lamakaan and a long-time radio ham, is in an elite company after being recognized for popularising the open-source Bit-X semi-kits.

About Sridhar Lecture: Sridhar Potlachervoo Lived amongst us briefly between 1979 and 2022. For more than half of that period, he was wheelchair-bound with a debilitating inflammatory disease called ankylosing spondylitis. During this time, he wrote some brilliant code, recited remarkably poignant poetry, organized charity to support athletes from poor families, and paid for the education of scores of young adults.

Organizer
Lamakaan
Lamakaan, An Open Cultural & inclusive space in Hyderabad that promotes and presents the best of art, literature, movies, theatre, debates, discussions, and dialogue with a commitment to being open and accessible.